At the a2n Un-Convention FACTORY, all2gethernow in cooperation with Un-Convention, converted the Kater Holzig gallery in a recording studio, and produced an album in a day, with 9 tracks by different artists. Designers, photographers, web developers, producers, musicians … who didn’t know each other before, came together in the morning – and had jointly produced an album together by the following day. The event was open for everyone to pass by, engage, ask questions. The album is available on CD in screenprinted CD cases alongside with posters, and as digital download (finetunes, iTunes) and stream (Simfy, soundposter).

You can get an idea of what happened during the day through this photo documentation. Thanks to photographer Dieter Engler for documenting the day in pictures. 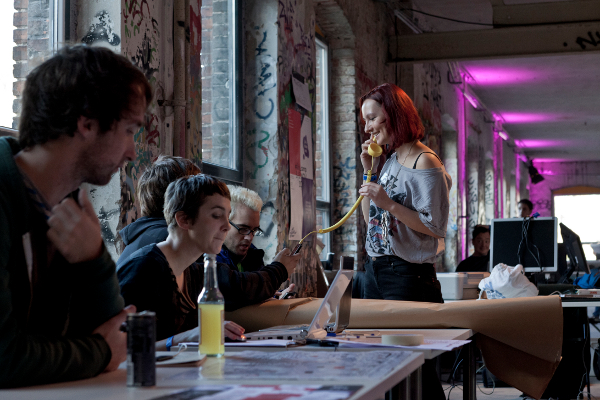 The all2gethernow and Un-Convention team set up in the morning. The info desk at the Kater Holzig gallery entrance leads participants and guests the way. On the phone is Ruth Daniel of Un-Convention who developed the FACTORY idea (album production in a day). Since the first FACTORY in Macclesfield/UK in 2010 she has replicated the concept in different variations in places such as Medellin/Colombia or Copenhagen/Denmark. 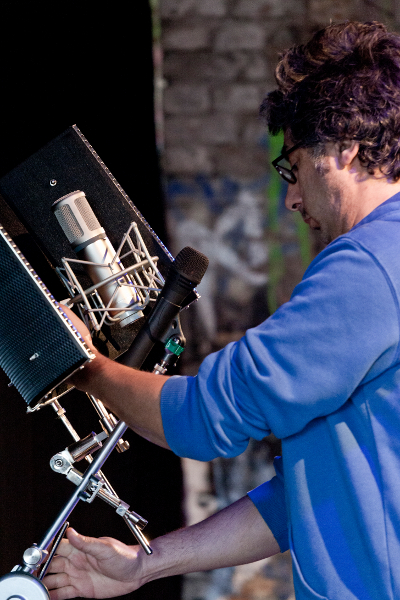 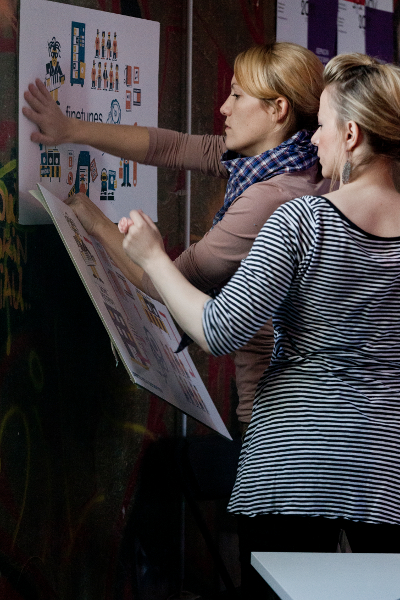 Janine Lubas and Swantje Fiedler of our partner finetunes set up their booth, where they will prepare the digital download and stream of the album. They collect metadata from all artists during the day, so that all tracks will appear correctly labelled online. 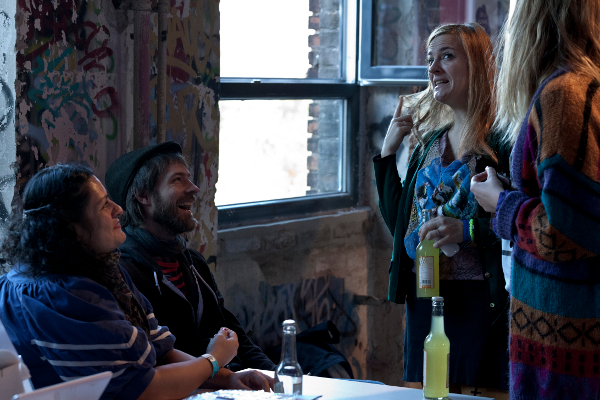 The first artists arrive to record the first track on the album – MILLE (right). Melissa Perales (left) participated in the organization of the FACTORY and Christoph Schrag had announced the event to the musician community listening to Fritz Unsigned the sunday before. 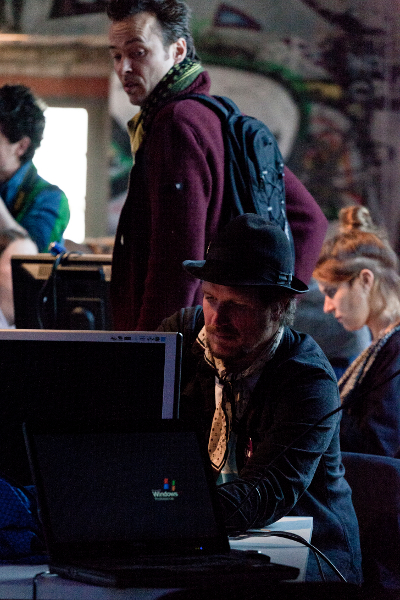 Konrad Lauten and Andrea Goetzke, both organizers of the day, concentrated on whatever preparatory work still needs to be done. Luca Romeyke of Berlin Music Days visits the FACTORY, as one of the many events taking place during the BerMuDa festival week. 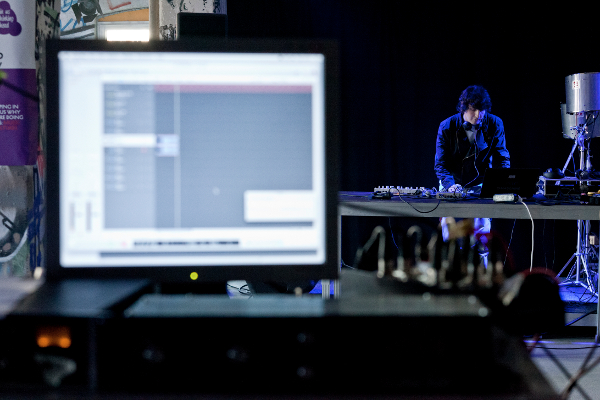 Studio recording as seen from the producer’s seat. Now it’s the turn for VIDEOHEAD, who came along from Manchester with the Un-Convention team. He includes sounds recorded in the streets of Berlin in his track. The topic of the FACTORY album is “Berlin club night”, from the first drink through to the afterhour. 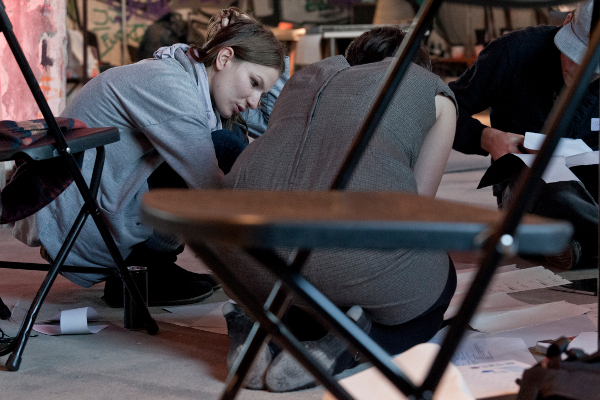 The designers of the album cover (from left) Lamia Michna, Stephanie Piehl, Paul Dessenoix have met each other for the first time in the morning. Now, they are developing an idea for the artwork together. 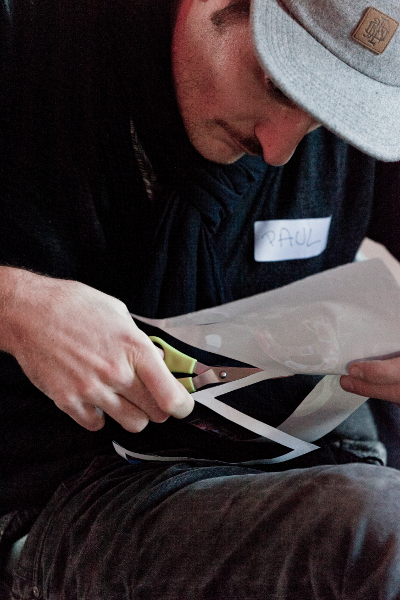 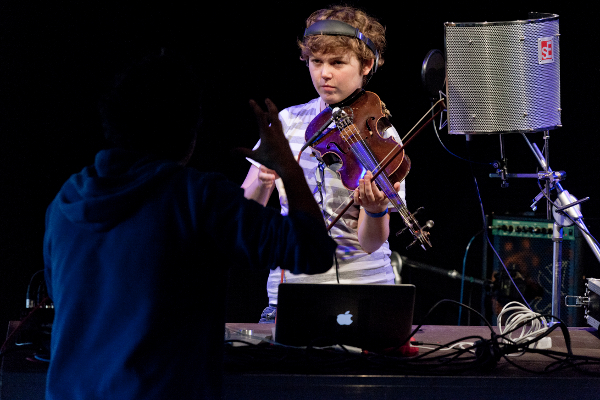 Next recording – with Golden Diskó Ship – discussing some details with the producer. 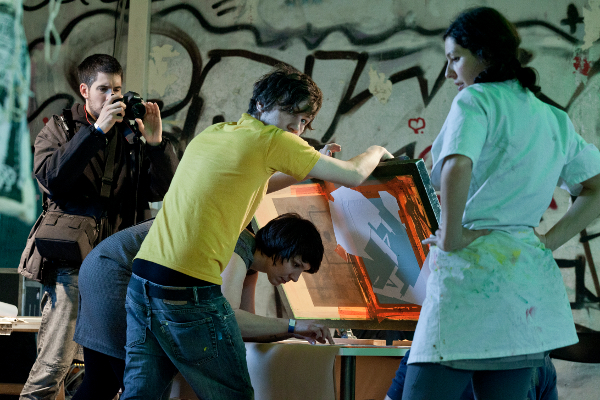 The design ideas and templates are ready. Now … screenprinting – with the Czentrifuga crew. 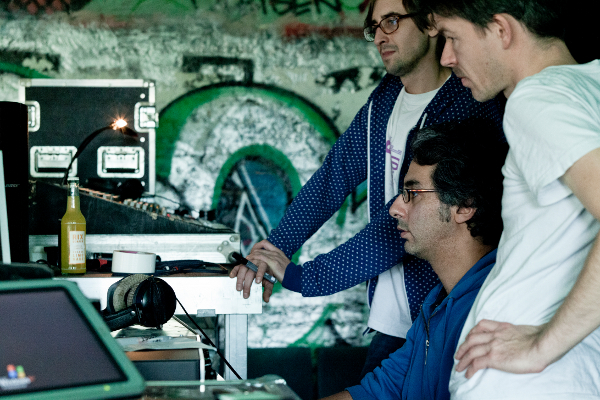 The producers Norman Nitzsche and Ramin Bijan, along with the technician for the stage sound. 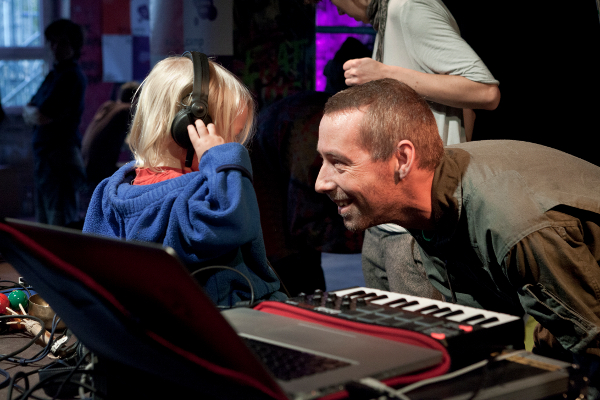 Next recording – Alice and the Turneykids, with the kid participating. 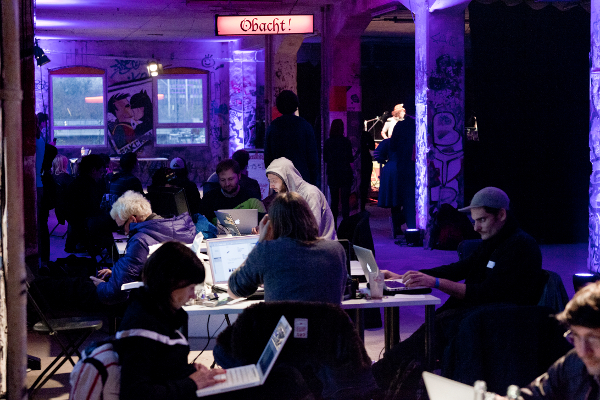 It’s getting darker outside – and the album production is going on. The designers and web people are located in the front left, and the recording studio in the back right of the room. The studio is set apart a bit with panels of thick black molton cloth. The red light shows that the recording currently is in process, and indicates for everyone in the room to be a bit quieter than usual, in order not to disturb the recording. 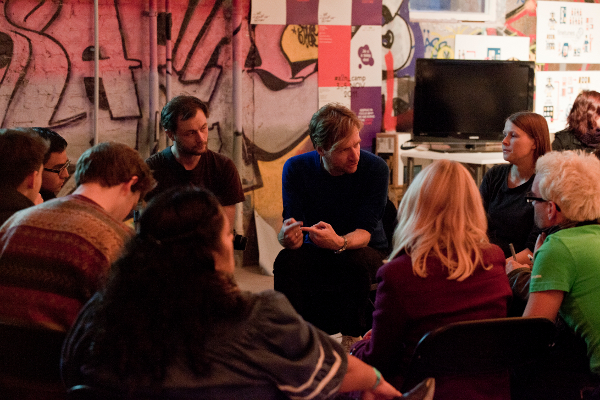 A well attended mini workshop on working with a label by Tim Renner, manager of Motor Entertainment and part of all2gethernow’s executive board. 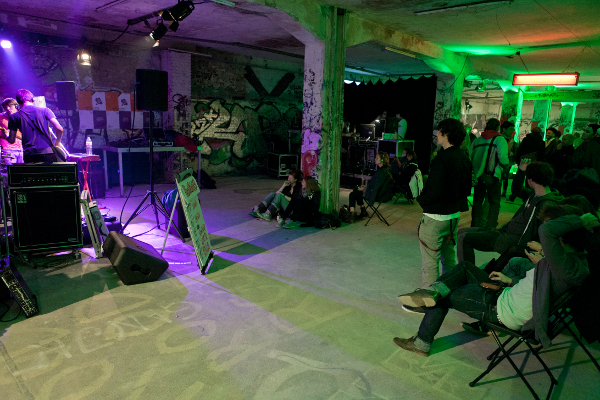 Visitors are listening to the next recording, by the band Ludwig. This is the view of the room from the recording area. 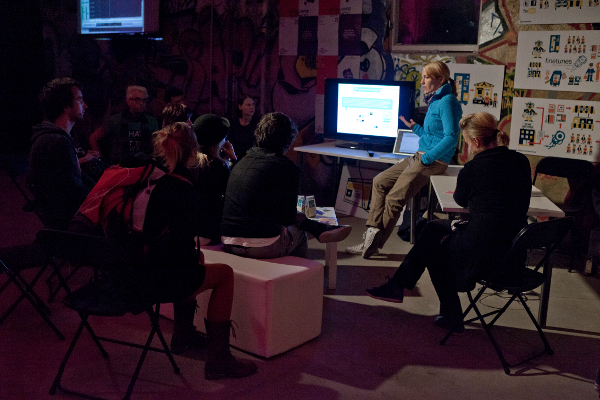 Another mini workshop – Janine Lubas of our partner finetunes talks about practical details of digital distribution. 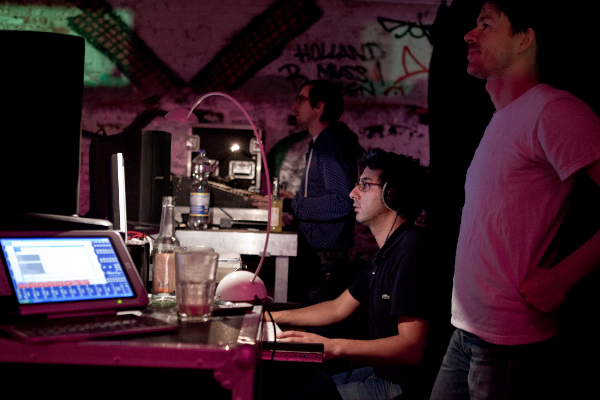 Music production continues. By the way, the two producers Norman and Ramin spend the longest time of all participants in the FACTORY. They continue mastering all album tracks until 7 am the following morning. The completed files are then uploaded immediately on the finetunes server, for production of the CD and preparation of the digital download. 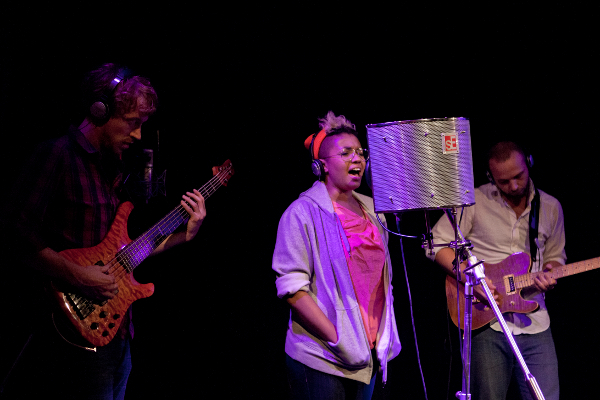 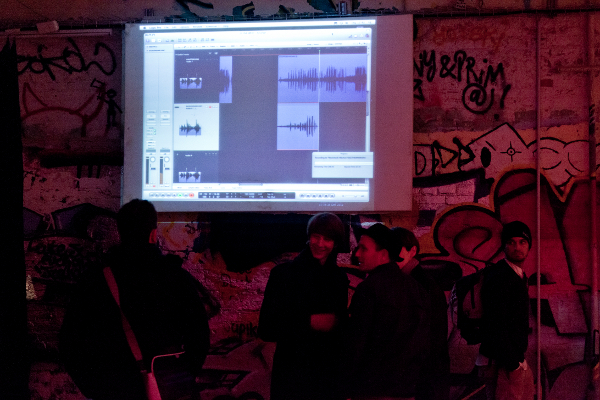 The producer’s screen is being projected publicly on the wall, so participants and visitors can better understand what’s happening “behind the scenes”. 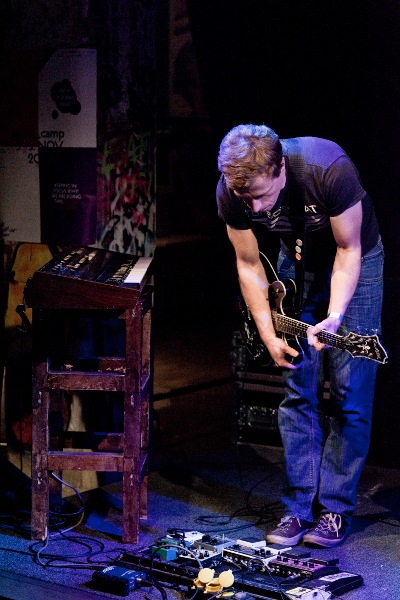 And while the last musician of the day, Petula, records his track (which will become the opening track of the album) … 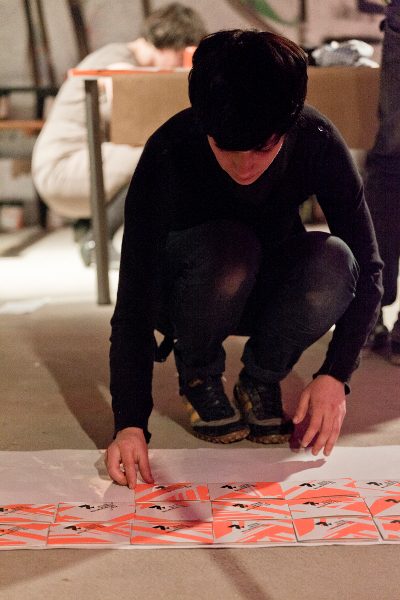 .. the designers give finishing touches to the album artwork. 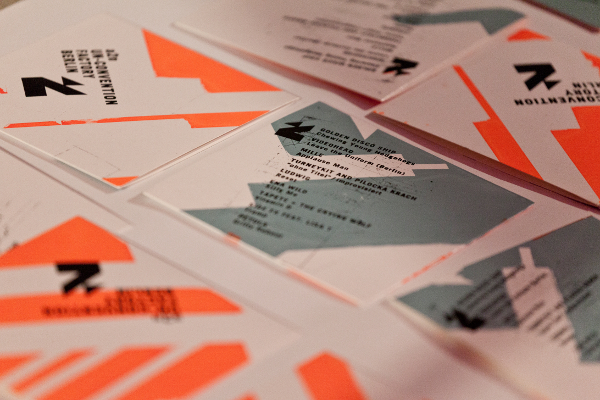 And here it is: the a2n UnConvention FACTORY Berlin album! Finetunes delivers the CDs the following day, and makes the album available via stream and digital download.

THANK YOU to everyone who participated in a2n UnConvention FACTORY Berlin!

Enjoy the album at:

Malte Reissig, part of the web team, created a soundposter for the album: http://www.soundposter.com:8080/topicmap/2429